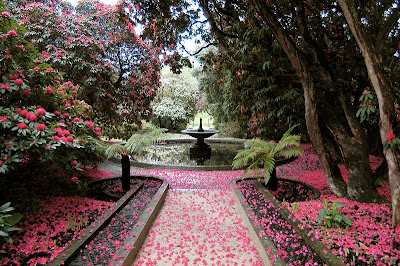 Just had to share this picture of Holehird Gardens,
Troutbeck, Cumbria originally found in a copy of
The Lady magazine I flicked through whilst waiting
for a friend in a car showroom. Isn't it gorgeous!!
Posted by GardenGirl at 23:55 No comments:

This year I am really enjoying the garden and feel so lucky to be able to spend lots of  time working, eating and sometimes snoozing in it. Unfortunately, all my creativity    seems to have gone into sowing instead of sewing and my miniatures are being badly neglected.
However, soon all my planting will be completed and then I am hoping the sewing will replace the sowing!!!  Check out my garden page for latest photos and proof that I have not just been sitting about in the sun all the time.
Posted by GardenGirl at 22:48 No comments:

JUST LOOK AT THIS !!
CAN'T WAIT TO SEE IT
FOR REAL - LEONARDSLEE
GARDENS HERE I COME -
More Images at  http://www.leonardsleegardens.com/Albums/Beyond%20the%20Dolls%20House/index.html
Little Victorian Secrets - Trailer from Fact Not Fiction Films on Vimeo.
Posted by GardenGirl at 15:14 2 comments:

A VERY WARM WELCOME AND THANK YOU FOR VISITING TO
DAISY
JEAN
CAROL
SHELLEY
DEBBIE
ANA
Posted by GardenGirl at 23:52 2 comments:

Diva Daughter in Pirates Of Penzance 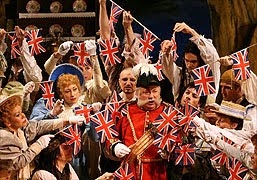 Diva daughter Lindy is in mid-tour with the Carl Rosa Opera Company's 2010 production of Pirates Of Penzance which is being very well received again. As you will see from the pictures on my 'Diva Daughter' page she has also been on tour with several of their previous productions.

“You can look at something like The Pirates Of Penzance as if it is a dirty old painting.

“You ask questions of it and look for its relevance. You take layers of 125 years of dirt off it, put it in a new frame and hang it in the centre of the room. People are amazed at how fresh and beautiful it looks, although you are doing nothing more than cleaning it up.”

So says Peter Mulloy, the artistic director of the Carl Rosa Opera Company and the director of The Pirates Of Penzance, which is launching its national tour in Brighton tonight.

The new production stars Paul Nicholas in the role of the Pirate King. His involvement continues a link with the company that saw him play the Sergeant Of Police in last year’s short tour when it came to Chichester Festival Theatre, stepping in for Jo Brand at the last minute, and playing Jack Point in The Yeomen Of The Guard at the 2009 Tower Of London Festival.

“Paul knows the role,” says Mulloy. “He has done it before, but he is relishing the chance to do it with an opera company like ours.

“Paul has been doing this for a long time, and that doesn’t happen by accident, he’s still at the top of his game. After The Yeomen Of The Guard he said he loved the experience so much that if we ever wanted him to do something again he would love to do it.

“He’s perfect for the Pirate King.”

The Pirates Of Penzance was the first production the Carl Rosa Opera Company performed when it was relaunched 12 years ago.

The company’s history dates back to the 1873, taking its name from its founder. Carl Rosa was a violinist who was a contemporary of Arthur Sullivan at Leipzig University.

The original company closed in 1958 when it merged with Sadler’s Wells Opera. In all that time it had never performed a Gilbert and Sullivan production because the copyrights for the operettas remained with the D’Oyly Carte Opera Company until 1961.

“When we revived the company we felt The Pirates Of Penzance was one of the most popular musical theatre pieces, and a favourite among Gilbert and Sullivan fans,” says Mulloy.

“Very few people realise that the great American composers Cole Porter and George Gershwin were massive fans of Gilbert and Sullivan. Those two composers were the start of the American musical theatre tradition, and they were inspired by Gilbert and Sullivan’s word-smithing. It is interesting that Gilbert and Sullivan has stood the test of time, when a lot of shows that were written at the same time, and were more popular in their day, haven’t survived.”

He puts part of this down to the universal themes at the heart of much of Gilbert and Sullivan’s works, with the activities of the devious peers in Iolanthe mirroring the MPs at the centre of the recent expenses row.

“Gilbert and Sullivan’s plays are about class, and people’s arrogance, hypocrisy and intolerance towards other people,” says Mulloy.

“They are all approached with tongue-in-cheek, but there is often a very subtle pill wrapped up in all of them. The message is generally that we are human, and should never forget that. We make mistakes and can mess things up.” 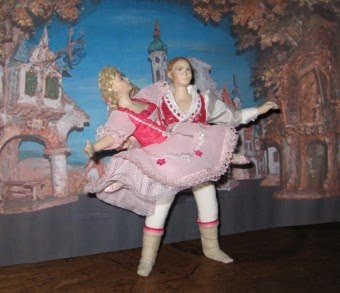 My latest miniature creation -
These unique OOAK Coppelia style ballet costumes have been designed and made by me to fit two 12th scale porcelain dolls (supplied by Beverley Senatore who you can find on ebay under mini doll art). Both outfits are sewn together and are completely removeable. Normally I only supply garments but these special 'Pas De Deux' dolls will be for sale as a dressed pair.
Posted by GardenGirl at 15:10 2 comments:

GardenGirl
St Leonards On Sea, East Sussex, United Kingdom
Enforced retirement following redundancy two years ago at the age of 58 after 38years with the same company.Married (but seperated) with one daughter. Now live alone following the death of my mother whom I lived with for over 20 years and am slowly adjusting to the massive changes the last few years have made to my life. My lovely daughter is an opera singer but also a Michael Jackson fan so we both share a love of all types of music,theatre and dance. My mother was a dressmaker by profession and my father a metalwork teacher so 'hand made' has always been familiar territory to me. Over the years I think I have made every type of garment imaginable plus fancy goods, toys and upholstery. At the moment I am enjoying making dolls house miniature clothing and you can see some of my creations in my album. My favourite place is in the garden and the best part of being retired is being able to step into that green oasis of calm whenever the weather permits.